A Closer Look At Betsoft 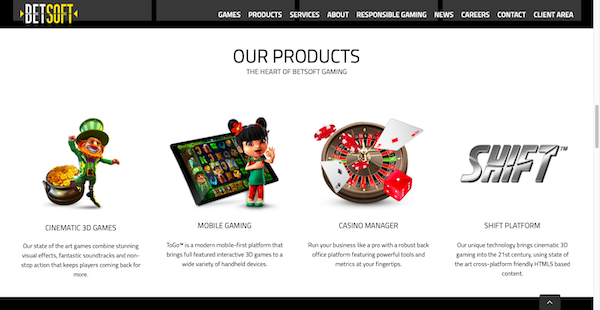 Longevity. This is what sets Betsoft apart from its competitors in the iGaming industry. Having been around since before the turn of the century, Betsoft has long proven its ability to craft top-notch gambling software for online casinos.

Born just a year after RealTime Gaming was founded in 1998, Betsoft is one of the pioneers in the online casino software providers market. It was originally headquartered in Lytham St. Annes, a small town in North England. But after two decades and following its extensive involvement in the success of numerous online casino brands, the famous provider is now based in Valletta, Malta

Betsoft did not really hit it off right away. And this is perhaps the reason why it listed 2006 as the year of its foundation on its website even though it was originally formed in 1999. Its first taste of massive success came in 2008, nine years after its inception. And it’s all thanks to its Slots2 series—a unique set of games packed with stellar graphics and exceptional gameplay features. In 2012, Betsoft further cemented its name in the industry after releasing the ToGo series—a collection of supreme-quality slot titles that are compatible with mobile devices.

Betsoft has been awarded Slots Operator of the Year in the past, and it has also bagged other distinctions, such as the EGR Magazine award. The honors are not surprising considering that the company has always put innovation at the heart of its work. Its solid team of experienced account managers, engineers, software developers, game designers, graphic artists, 3D animators, and marketing specialists always see to it that every product it releases passes only the highest standards known to Betsoft since time immemorial.

Through the years, Betsoft has managed to narrow down its creations into six main product offerings: Desktop Games, Mobile Games, Casino Manager, the Shift Platform, Vault, and Others. Its Desktop Games line of products is headlined by its Slots3 collection of highly interactive games for PC and laptop. On the other hand, the Mobile Games product line features a variety of titles designed specifically for handheld devices.

Casino Manager is a state-of-the-art management and administration package that its clients can use to best run their online casino operations. Meanwhile, the Shift Platform boasts of top-caliber HTML development from its pool of veteran designers with industry-leading expertise. As for Vault, it refers to a service that enhances the overall speed and gaming experience of its products by providing downloadable software that grant access to its desktop and mobile casino games.

The Other Products category on the Product page of its website is dedicated to two of its less well known but equally stellar product offerings. First is the Mini Games that comes with several classic casino favorites, such as Blackjack, Lucky Seven, and High Low. The other product is the Virtual Racebook that provides an amazing, true-t-life 3D horse racing simulator for players who are very enthusiastic about the sport. This product utilizes the same cutting edge technologies used by Betsoft’s other product series, including Slots3.

To date, Betsoft is home to more than 200 top-notch progressive slots and video slot games. It has also launched an extensive number of classic casino games for both desktop and mobile devices. In the iGaming industry, the brand is widely known for having the finest selection of 3D slots, virtual table games, and video poker titles.