A Closer Look At Rival 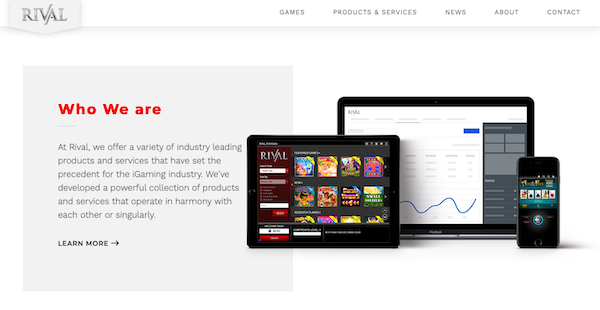 Though not really part of the pioneers in the industry, Rival is still considered a standout brand by most because of its world-leading casino games and software. It is also regarded as one of the best B2B developers out there since its software is mostly used by the world’s most successful casino operators.

Unlike RTG and Betsoft that were established before the turn of the century, Rival was founded in 2005. Then, it took a year before it was able to unveil its production to the public. Rival was able to quickly cement itself in the iGaming industry, and it’s hard not to see why, The company has a straightforward approach to its craft: “Build games people love to play, provide services and support to bring those games to the market effectively.”

Through the years, Rival has stuck to its philosophy wholeheartedly. And today, the company has reached more than 50 online casino operators across the globe. Its repertoire also boasts of more than 260 titles that are capable of running seamlessly on mobile platforms. Its software is also well-known in the American market since it is one of the several suppliers that cater to the US market from the get-go.

Rival initially focused on game development during its early years, and this wasn’t a bad thing at all. For one thing, it helped the company establish itself in the market by releasing top-notch and innovative slot titles alongside the classic casino games. However, Rival has also branched out to other products.

The provider has a full casino backoffice platform called Casino Controller that is not only easy to use, but more importantly is capable of providing users instant access to critical information with just a touch of a button.

Rival also has its proprietary live chat service, aptly called Live Chat. It is a powerful chat system that can be installed on websites. What makes it stand out is the fact that it has a similar design and mechanism to instant messaging apps. It can handle thousands of simultaneous chats without lag or other performance issues.

Finally, there’s ClassAct, Rival’s unique automation tool that is extremely useful for online casinos. Users only need to create events, set rules, and schedule them using this tool, and ClassAct will be the one to execute them. It also has other functions, like assigning player classification, rolling out bonuses, and spotting fraudulent activities.

As mentioned earlier, Rival now has over 260 titles. Its portfolio of proprietary casino games is still growing. It has browser-based games and mobile games, so players are free to choose which ones they like depending on the device they are using.