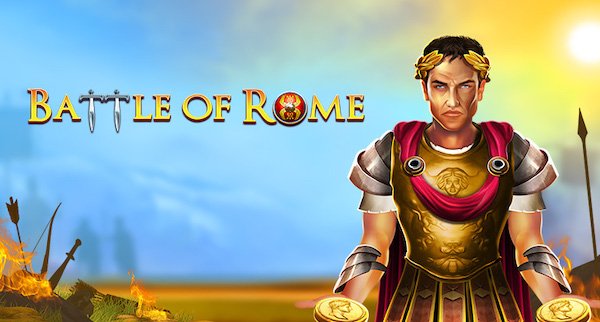 Arrow’s Edge is bringing its latest offering to two of our favorite online casino brands this week, Slots Capital and Desert Nights. Battle of Rome is an action-packed slot machine that centers on the Roman civilization and features bright graphics and crisp audio. Learn more about the game and the special offers below.

It is time to put on your armor and battle for the empire in this thrilling slot that is packed full of features. The 5-reel game with 3 rows and a massive 3125 ways to win gives you the chance to claim the spoils of war as you march with the Roman Legion. If you are successful, the emperor may grant you free spins while after any winning spin, the brave among you may be able to double the payouts. There is much more on offer in this exciting game, such as bidirectional paylines, a progressive jackpot and a Rapid Play mode for those in a rush.

Regular slot players will know that winning combinations are normally possible on adjacent reels from left to right. However, in this game, they can also be formed from right to left, which effectively doubles the number of paylines.

The beautiful woman is the wild symbol; she can land on reels two, three and four and she will substitute for all of the regular symbols to help you form as many winning combinations as possible.

This feature begins when four bonus symbols land on the reels. You will be granted an instant mystery prize, ensuring you have plenty of money to keep playing with.

Landing three, four or five of the emperor.Free Spins symbols awards you with 5, 10 or 15 free spins, respectively. During the free spins, a special golden horse symbol can land and when it does, it will be collected in a meter. It takes three horses to fill the meter and when it is full, five extra spins are awarded.

After any winning spins, you can activate the Double Up feature to try to increase your payouts. First you have to select your host, the man or the woman, and then you have to choose from their two coins. If you pick the correct coin the winnings will be doubled and you can try to repeat the procedure up to five times in a row. However, one incorrect pick and all winnings are lost.

In addition to offering a top fixed payout of 1000x for landing five Colosseum symbols on the reels, Battle of Rome slots is linked to the Cash Grab progressive jackpot. The Cash Grab Jackpot is won at random and it is typically hit when it is worth anything between $2,000 and $5,000.

You can join the army marching to war whenever you so desire as the game is fully mobile compatible and can be played on the vast majority of smartphones and tablet devices.

If you are in a rush and eager to slaughter the enemy and claim some winnings, then you can use this mode to display instant win outcomes without the need to wait for the reels to stop spinning.