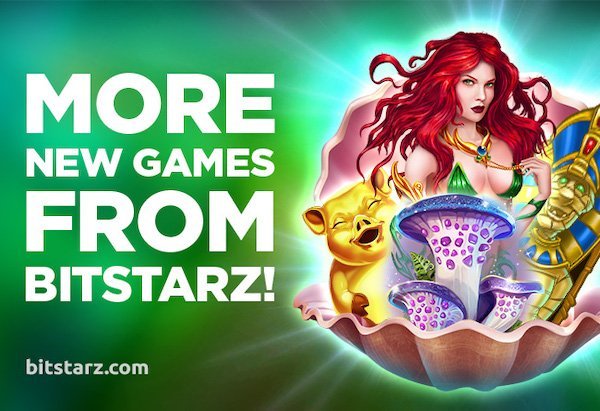 Over the weekend, BitStarz Casino’s game collection expanded with the addition of four new titles from different providers. One of them is inspired by the upcoming Chinese New Year. Check out the eclectic lineup below.

Headlining the group of new games is an entry from iSoftBet. From its title alone, it is obvious that The Fortune Pig is the Chinese New Year-themed slot. Based on the Chinese calendar, the Year of the Pig will commence this Tuesday. So playing this new game is a great way to ensure luck while welcoming the Earth Pig.

This is a 5-reel, 25-payline game. It has an impressive 12,500 coin payout on a single spin, and its Fortune Free Spins feature offers up to 500x the stake on each free spin. Apart from the Cash Re-spin and Stacked Wilds features, the attractive visuals and invigorating background music would surely keep players asking for more.

BetSoft’s newest slot offering has also landed on BitStarz. This game has enchanting elements that could persuade players to spend a few hours spinning the reels. Its design is simply ethereal, so every game is guaranteed to be magical.

Speaking of its gameplay, Faerie Spells is a 5-reel, 10-payline slot with four jackpots available to be won. A single spin could unlock 25 Free Spins, while the Magic Toadstool feature offers a cash prize that awards a line win. There’s also a Double Up feature that doubles the winnings in a snap.

Show Me The Mummy

The third slot added to BitStarz’s collection is from Booming Games. Called Show Me The Mummy, the game is designed to take players to a trip all the way back to ancient Egypt. If you are interested in pyramids, the Sphinx, scarabs, and the Ankh, then this game is definitely a perfect choice for you.

Show Me The Mummy is a 5-reel, 5-payline slot with a 2,500 maximum coin payout on a single spin. It has an ‘SC’ Scatter symbol that unlocks Free Spins. Landing multiples of this symbol would then reward players with five, ten, or twenty Free Spins. Also worth noting are the Mystery Wild Reel and Mystery Multipliers that make this game even more fun and rewarding.

Last but not the least is Spinomenal’s Siren’s Treasures. This slot game is inspired by mythical creatures who lured nearby sailors with the use of their enchanting voices and music. Sirens are absolutely dangerous, but then you will need their help in winning this game.

Siren’s Treasures is a 5-reel, 50-payline slot that is set on the stormy rocks of an island haunted by sirens. The game offers a 200x multiplier per line should players get five Wild symbols. It has a 2,000 maximum coin win and houses several enticing features including Free Spins, Stacked Wilds, Mystery Symbols, and Sticky Wilds.

Don’t miss your chance to be one of the first people to try these games out. Visit BitStarz Casino today!

Why BitStarz Is The Must-Join Bitcoin Casino Right Now