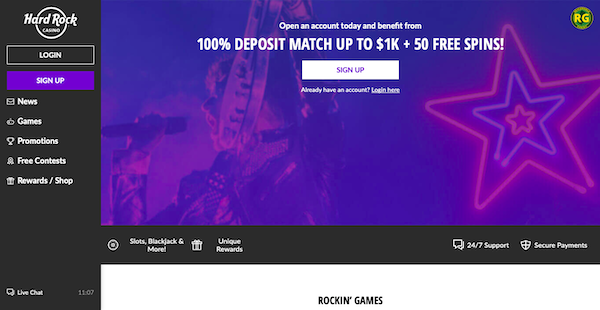 It hasn’t been that long since Hard Rock International launched its New Jersey-focused online casino, aptly named Hard Rock Casino, but it is now celebrating the milestone of hitting $1 million in monthly gross revenue for the first time.

Hard Rock Casino was officially launched on June 28 of this year, just a day after the former Trump Taj Mahal property opened its doors to the general public, as per CasinoBeats.com.

It’s not surprising that the online gambling platform quickly earned such massive monthly revenue, however. First and foremost, it’s designed and marketed as a casino that offers “an unparalleled online gaming experience and industry-first rewards program.”

Hard Rock Casino boasts of more than 300 playable online slot games, table games, live dealer games, and other classic and modern casino games. The platform also has an app for iOS and Android devices, making it very accessible to consumers who like playing while on the go.

“When we launched HardRockCasino.com alongside our Atlantic City property four months ago, we did so with the goal of creating a fully integrated online and land-based experience unlike any other in New Jersey,” SVP Online Gaming at Hard Rock International Kresimir Spajic was quoted as saying by InterGame.

“Hitting the milestone so quickly, in such a competitive market, is proof that we are giving players the offers, gams and rewards they want when they play online, on mobile or on the boardwalk,” Spajic added.

In addition to its high quality games and promotions, Hard Rock Casino is also frequented by many because of its unique integration that enables players to earn and use online comp points to stay and dine at Hard Rock Hotel and Casino Atlantic City.