How To Play Blackjack 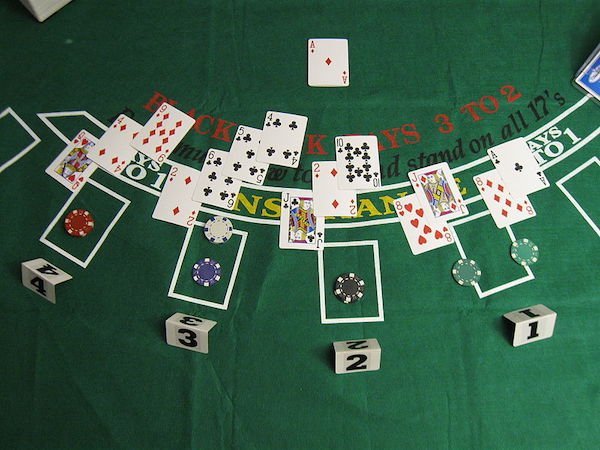 Blackjack is undeniably the most popular casino table game in the United States. Many Hollywood films even featured the game and exposed how card counting can be done to gain an edge over the casino. If you are a novice in this game, it would take time, patience, and concentration to master the rules and come up with an effective strategy. However, since you are already reading this, then you are on your way to acing the game the next time you engage in a beer-and-blackjack session with your friends.

The origin of blackjack still remains debatable as of late. There is no consensus on where the game really came from. However, many agree that blackjack most likely originated in French casinos circa 1700. At the time, the game was called Vingt-et-Un, which translates to twenty-one. Most also believe that Vingt-et-Un was derived from from the French card games Chemin de Fer and French Ferme that were very popular back then.

Interestingly, another theory about blackjack’s history claims that it was invented by the Romans. Some researchers claim that the Romans used to play blackjack using wooden blocks with different numerical values. Based on general history, the Romans did love gambling, so this theory could also be true. Nevertheless, it hasn’t been proven at all.

What’s certain about the game’s history is its rapid spread in North America thanks to French colonists. It should be noted though that the game, referred to as “21” at the time, had a different set of rules from the modern-day blackjack that many casino players enjoy nowadays. The game was only called blackjack when some casinos offered a special bet in which either of the black jacks would pay 10-to-1 odds. This peculiar payout was eventually removed, but it was the basis of the game’s current name, according to The World of Playing Cards.

Blackjack is typically played using one or more standard 52-card decks. Each denomination is assigned a point value. The cards 2 through 10 get their worth from their face value. Jacks, queens, and kings are each worth 10, while the aces could either be 1 or 11 depending on the cards they are with.

The main objective of the game is very simple: the player should draw cards close or equal to 21 in value and not go over the dealer’s cards. The best combination of cards is a two-card 21, which basically means having two cards that total to 21. Should the player get a two-card 21, he or she is entitled to receiving a 3-2 payoff. However, if the dealer also has a two-card 21, then the hand is pushed or tied. In this case the payoff is simply the original bet.

Blackjack is a table game, so expect to see lots of players flocking an arc-shaped table when you enter brick-and-mortar casinos. For online casinos, the gaming experience is very different because you don’t get to interact with other people. Interestingly, many online casinos now simulate real blackjack games through live dealer games.

The arc-shaped table accommodates up to seven players on the outside. Meanwhile, only the dealer gets to play from the inside part of the setup. The minimum and maximum bets for the table and the common rules for the game are found in a rectangular placard situated at one corner of the table, as per HowStuffWorks. Should you still need assistance to understand the betting system and the common rules, you may ask for some guidance from the dealer before the game begins.

The game begins with the dealer shuffling the cards. Nowadays, a game uses four, six, eight, or more decks. Once the cards are shuffled, they are placed in a receptacle that is technically called a shoe. Players are then asked to place their chips or bets directly in front of them. Following which, the dealer slides out once card at a time from the shoe. Each player is given two cards.

In a single- or double-deck game, cards are dealt facedown so players may pick them with one hand to see what they have. In a shoe game, the cards are dealt face-up and players are not allowed to touch them. Either way, the cards of the dealer are turned face-up so players can see them right away. The dealer will draw more cards if a player is not satisfied with the combination he or she has gotten.

Once the cards are dealt to the players, they get to decide how to play out their hands. All of the players need to decide first before the dealer could play out his hand according to set rules. The dealer will be allowed to draw more cards until he reaches any total of 16 or less. He must stand on a total of 17 or more. In certain casinos, the dealer is allowed to draw to a “soft” 17 or a hand that includes an ace or aces that could be counted as 7. The most common of which is ace-6. Other variations include ace-4-2 and ace-3-3. In multiple deck games, a combination of ace-ace-ace-ace-ace-ace-ace is considered a soft 17.

Hit – This is when you as a player take another card or cards in hopes of having a combination that is closer to 21. Be careful not to exceed 21 before hitting because this could cause your hand to “bust” and lose the bet. In facedown games, the player can signal a hit by scratching he table with his cards. In shoe games, the player points to his cards or scratches and waves toward him to signal a hit. Verbal calls are not allowed in land-based casinos. Gestures are needed for the benefit of the security cameras that are recording every game.

Stand – This is when you stand and decide to not draw more cards in hopes that your hand has a higher value than the dealer’s and is closer to 21. To signal a stand in facedown games, you slide your cards under your bet. In face-up games, you hold a flattened palm over your cards.

Double Down – This is when you double your original bet and get only one more card regardless of its value. Take note that there are casinos out there that does not allow this if your first two cards already total 10 or 11. On the other hand, there are those that allow doubling down on any two cards. To gesture this move, you need to take a chip or chips equal to your original bet and place them next to the latter. In facedown games, players should show their original two cards after increasing their bet.

Split – This is when you get two cards of the same value. You are given the chance to make a second bet equal to your first and split the two cards such that each card would be the first card in a separate hand. To do this, slide a second equal bet to your betting box and the dealer will separate your cards into two hands. The dealer will then place a second card in your first hand and you can play this hand out in normal fashion until you reach either a stand or bust. The dealer will then place a second card on your other hand and you play that hand out.

Insurance – This is when you as a player protect yourself from losing all your bet during a round. If the dealer’s first face-up card turns out to be an ace, you can opt to have an insurance. This is basically a bet that the dealer has a 10-value card down so as to complete a blackjack. Insurance pays 2-1 and this can be taken for half the original bet. This is advantageous to players because if they lose their hand, they come out even because they still won the insurance bet.

Double Down After Split – There are casinos that allow players to do a double down after a split. This cuts the house advantage by .13 percent. Hence, many experts say players should do this strategy if the casino allows it.

Re-splitting of Aces – This is also another variation in blackjack mechanics. In most casinos, the player is allowed to split two aces and receive only one more card for each hand. In certain casinos, this rule is extended to another pair that ends up having two aces. The two aces are then re-split cutting the house edge by .03 percent.

Early Surrender – This is another strategy that cuts the house edge by .624 percent. Early surrender is done when the dealer’s face-up card is an ace. Before the dealer checks his facedown card to see if he has a blackjack, the player is entitled to making an early surrender. This means the player is surrendering half of his or her original bet instead of playing the hand.

Late Surrender – This is a more common type of surrender since it cuts the house edge by .07 percent in a multiple deck game and .02 percent in a single-deck game. The player can announce a late surrender after the dealer checks his facedown card to see if he has a blackjack.

Double Down Limited to Hard 11 or 10 – This happens when the player is not allowed to double down on a hand that has less than 10 total value. This is permitted in some casinos and it increases the house edge by .28 percent.

Dealer Hits Soft 17 – This increases the house edge by .2 percent and happens when the dealer hits hands including an ace or aces that can contribute to a total of either 7 or 17.

There are many other types of side bets in blackjack, and most of them are not very common. Many of them are not profitable to casino players, so they are best avoided, as per Casinoz.

Many veterans would simply say that playing blackjack is fun and exciting. However, the most obvious reason why many people enjoy blackjack is the fact that it gives a fairly decent chance of winning. The game is not based on sheer luck alone. It takes skill to play and even win it.

According to Wild Jack Casino, non-professional gamblers are attracted to blackjack because it is easy to learn and play. The objective of beating the dealer is also absolute and not that hard to grasp. Plus, there are different blackjack strategies and styles that players can follow and use to their advantage.

At the present time when most gamblers have turned to online casinos for practical reasons, blackjack still remains to be a popular option alongside slots and poker. Certain online gambling platforms have come up with straightforward and very plain blackjack games. Others invest in live dealer blackjacks to offer a simulated experience to players. It is up to you and your preference to choose which version is for you.