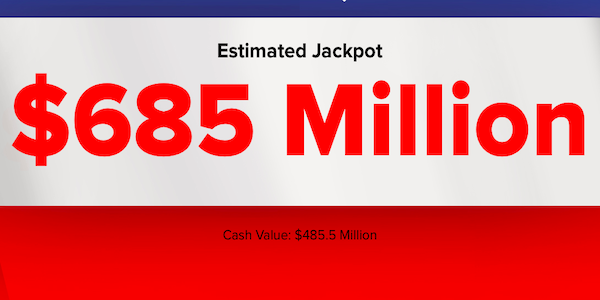 Powerball is going live again this Monday night for an all-new drawing of the lucky numbers. One ticket holder’s life is about to change once all the balls are drawn.

At stake at this week’s first draw is a whopping $685 million—the jackpot that is turning heads as it is on its way to breaking records and becoming the 8th largest prize in U.S. lottery history.

The all-new Powerball jackpot could become the 8th largest on the list as the seventh entry was secured by Powerball’s Oct. 27, 2018 jackpot, which amounted to a total of $687.8 million. On the other hand, the current record for the 8th spot is the $656 million jackpot on Mega Millions that was won on March 30, 2012.

If someone manages to secure all the winning numbers and combinations for Monday night’s draw, then it’s for certain that the $685 million at stake would be the 8th largest in the history of U.S. lottery. Should the latest draw end up without any winners, then the Powerball jackpot could continue to climb up on the list.

So what are the odds of winning the elusive $685 million jackpot, or its cash value worth $485.5 million after the draw? Apparently, the probability of hitting the jackpot is 1 out of 292,201,388. But hey, you might be the lucky one.

Since Aug. 23, Powerball has been holding three drawings per week in an effort to quickly increase the interest and grow the jackpot prize at a faster rate. Drawings are held on Mondays, Wednesdays and Saturdays.

Catch the live Powerball drawing this Monday night at 11 p.m. ET if you want to instantly find out if you won the jackpot. If you can’t watch the drawing live, then just check back on this page after the event because this will be updated with the Powerball Winning Numbers.

The Powerball Winning Numbers are found below: