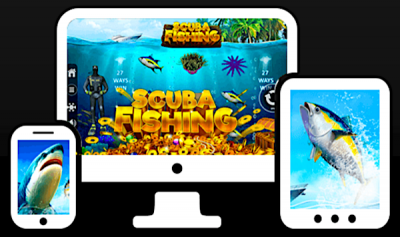 On Monday, Springbok Casino announced via a press release that Realtime Gaming is introducing a new slot game into its online casino. The South African company said the 3-reel online slot is officially launching on Sept. 19 on the different versions of its casino: downloadable software, instant play, and mobile.

In “Scuba Fishing,” players are going to don a wetsuit and scuba gear as they dive into the depths of the ocean to play with a variety of sea creatures. They should be mindful of the great white shark’s presence, since the behemoth acts as the Wild.

Having the white shark is definitely a good thing. When the creature lands on the middle reel, players get a Free Respin. Should three Wild Shark symbols show up, the Respin Feature is triggered. Because it acts as a substitution symbol, players can obtain Big, Mega, and Huge wins when the sharks surround them on the reels.

“Scuba Fishing” does not have a Scatter symbol, so the Wild symbol replaces all other symbols in the paytable and on screen. When the Wilds are locked in the second reel, players’ chances of winning will be increased. The new game is a 3-reel slot, so there are 27 ways to win.

“The depths of the ocean are rich with fish and sea creatures, but also undiscovered treasures. ‘Scuba Fishing’ allows players to explore a bold and beautiful underwater world, while also having the chance to win big,” Springbok Casino manager Daniel van Wyk said.

The beauty of “Scuba Fishing” is its simplicity. Springbok says Realtime Gaming came up with the game with the intention of delivering something different to its customers. It is free from numerous features, complex bonuses, and crazy animations, and yet that seems to be its charm. If not for the simplicity of the game, players might want to check it out because of its 7,500x max payout.