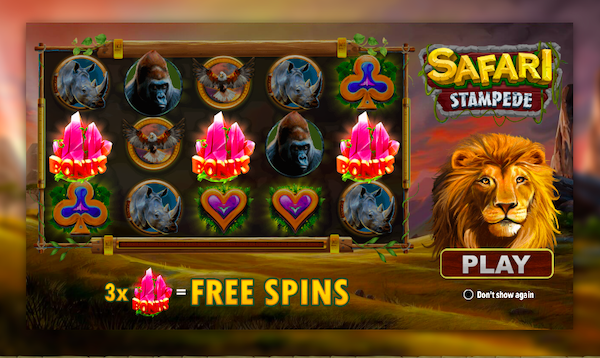 Safari Stampede has finally come to Miami Club Casino. To celebrate its launch on the platform, the casino is giving away a $10 Free Chip.

Safari Stampede is a highly volatile slot with 5 eels and 10 fixed paylines. The animal-themed game was developed by Dragon Gaming and is mostly inspired by the wildlife in the great African plains.

The natural habitat of wildlife animals include savannas and rainforests, and both of these are featured in the game along with some of the animals that typically live in them. Hence, animal loves will surely find this new slot offering a visual treat and more.

Aside from the stellar visual design, Safari Stampede also boasts of rhythm-filled soundtrack that is both relaxing and stimulating. Players will find themselves enjoying the game for long periods because of the Lion King-inspired background music.

The new game has two amazing features: Free Spins and Respins. The former will grant players with Free Spins when three or more bonus symbols appear in the gameboard. Players can receive 8, 10, or 12 Free Spins depending on the number of scatters landed.

As for the Respins feature, it is only activated when players land a Wild Reel. Landing the lion symbol, or Wild Reel, on the leftmost reel could activate up to four consecutive re-spins.

Check out the special promo Miami Club is offering to New Players of Safari Stampede below:

Learn more about Miami Club Casino by reading this REVIEW