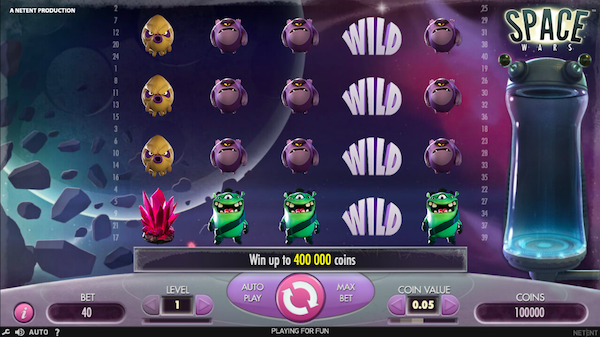 Exactly 55 years ago from today, Star Trek made its small screen debut on Sept. 8, 1966. And the legacy of the show and the franchise lives on until today as fans—called Trekkies—celebrate the annual Star Trek Day with different activities, ranging from movie and show marathons, friendly gatherings, and many more.

And if you are a Trekkie who wants to imbibe the Star Trek Spirit but would rather do so within the premises of your home, then worry no more. We are bringing you two online slot recommendations to satisfy your craving for some space adventure.

NetEnt has created an interesting space-themed slot in Space Wars—a more alien-centric title with a very in-your-face approach when it comes to presenting different alien species in the game board. The game hosts about 10 different alien species and each of them has their own perks. Despite not having Scatter or Bonus symbols, the game is still very entertaining with its Wilds, Re-Spins, and other features. We recommend playing this game at BitStarz Casino!

Arrow’s Edge has also come up with a galaxy war-themed slot machine in Star Slots—an online slot machine with very familiar characters that have been altered to prevent issues with trademarks. Three notable features of this game include spinning wilds, a free spins bonus game, and the final game that involves battling it out with space villains in an effort to win the ultimate space war. We recommend playing this game at Drake Casino!