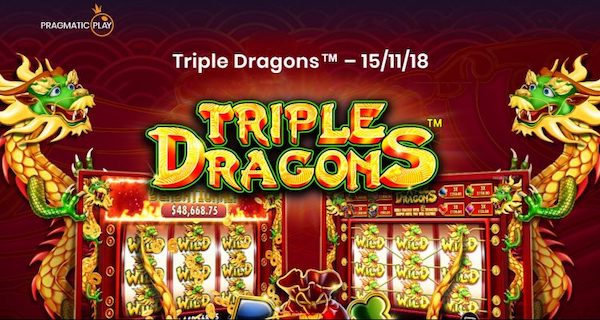 “Seek until you find the three lucky dragons which will guide you to your next big win. Once your spin brings you a stack of three vertical dragons they will turn into wild symbols and the ‘Respin until you win’ feature will be initiated.”

Black Diamond, Box 24, and Spartan Slots are offering new members the chance to enjoy the new slot title by giving them 25 no-deposit-required free spins and 200% of up to $2,000 match deposit bonus. The promo is also part of the standard Welcome Package.

Pragmatic Play launched Triple Dragons on Nov. 15. The new slot title is based on the lucky dragons mentioned in Asian folklore. The game features three lucky dragons that could show up in the reels. When they do appear, big prizes are unlocked.

The Return to Player (RTP) of the game is 96.51%, so it gives players a high chance of winning. The symbols are said to pay left to right on adjacent reels. The appearance of three gold dragons in the reels automatically secures the highest prize. Meanwhile, the three peaches and three red bags unlock the next two highest prizes, according to World Casino News.

The minimum bet one can place in this game is $0.05. The maximum is $50. Triple Dragons has an autoplay feature, so players can just enjoy the game by watching the reels spin on their own. The feature is optional, so players are free to choose if they want to automatically spin the reels, or manually do it on their own.