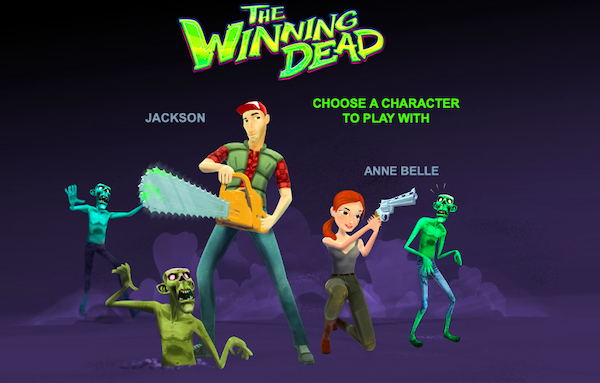 Probably one of the most interesting titles to come out of Arrow’s Edge, The Winning Dead is a zombie-themed video slot that promises big jackpot prizes. And it is now live at Slots Capital and Desert Nights Casino.

The Winning Dead is set in a post-apocalyptic world that has been conquered by hoards of zombies. And the only way to survive is to battle the undead using one of the two main characters: Jackson and Anne Belle.

If you choose Jackson, you will be equipped with handheld weapons, like a chainsaw. As for Anne Belle, she carries a gun so shooting your way through  a battalion of zombies should come easy for her.

The Winning Dead is a 5-reel, 25-payline video slot. The bet you can place per line could be as small as $0.01, or be as big as $10.00. Either way, you will get a chance to win some big prizes in this game as long as you collect winning combos from left to right.

What keeps this title distinct from the rest is the fact that it has a random progressive jackpot. This means players can win on any spin regardless of the outcome of the game or of their bet size.

Given that this is a video slot, players will get to enjoy a first-person-shooter experience whenever the Zombie symbol appears on reels 2, 3 and 4 at the same time. And when they do appear, it is up to Jackson or Anne Belle to kill the undead creatures. Killing 3-5 zombies will unlock bonus credits.

Arrow’s Edge has also designed The Winning Dead to offer customizations. One of them gives players the ability to choose from four different settings when playing the game, namely: Amusement Park, Graveyard, House and School.

Check out the exclusive promos that Slots Capital and Desert Nights Casino are offering to celebrate the launch of the game on their platforms.